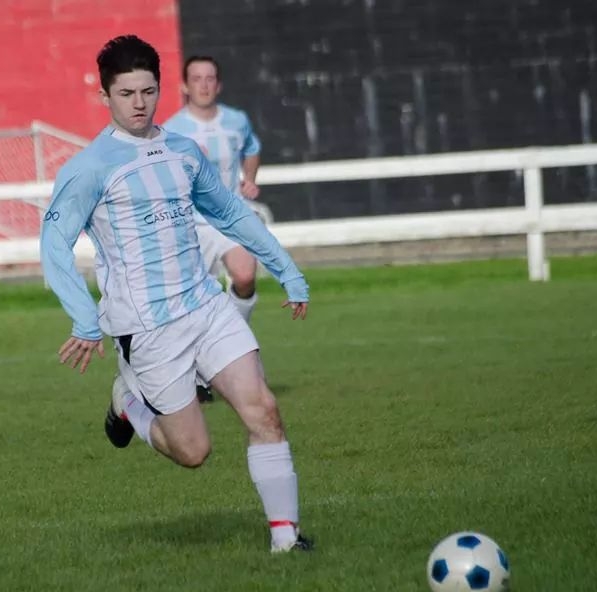 Following on from the statments issued by Club Chairman, Myles Staunton and interim manager, Pádraig Burns, the club would like to offer its own tribute to the late Adam Mulchrone RIP.

Adam was a young talent with a great future in the game with the club, having come through the underage ranks and made his Junior footballing debut with the Premier League team as substitute against Ballyglass, scoring a memorable free kick in a 2-2 draw back in 2014. The following summer, Adam was part of the side that won the Tuohy Cup, which was his first piece of silverware and his performances with the Premier League team brought him to the attention of then Super League manager, John Brennan. Adam was influential in the Super League team’s league wins in 2016 and 2017, chipping in some good goals and produced an array of dazzling skills that lit up the pitches around Mayo and it was those performances that earned him a place in the shortlist for Mayo Young Footballer of the Year for 2017. While there were no trophies in 2018, Adam still lit up the pitches again with some mesmorising displays that impressed former manager John Russell and interim manager, Pádraig Burns. Quiet in personality, whatever talking that was done on the pitch was with the ball to his feet and he made a very huge statement in his short time with us.

As a mark of respect to the late Adam Mulchrone, the Masters League fixture against Castlebar Celtic has been called off (alongside all Masters League matches), this Friday’s Stars In Their Eyes has been postponed until a later date and the FAI Junior Cup match away to Peake Villa has been deferred until Sunday 10th February. Funeral arrangements have been posted elsewhere.

Westport United extends its sympathy to the family, friends and team mates of the late Adam Mulchrone and may his gentle soul Rest In Peace.