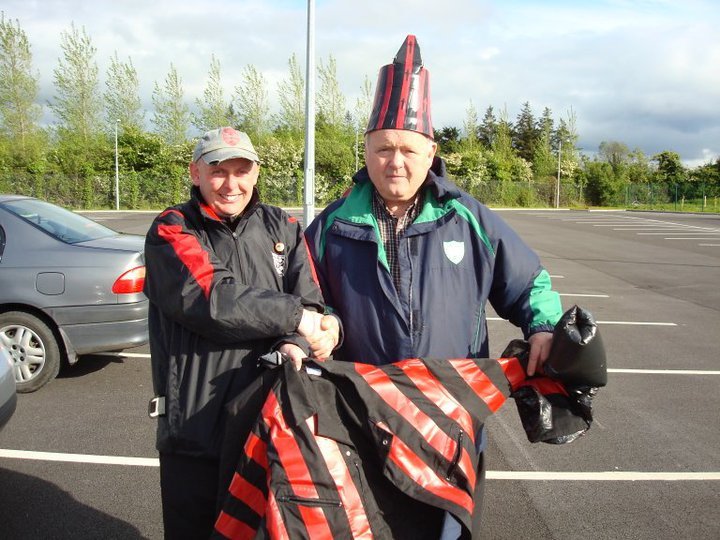 Sport lost one of its great characters yesterday as the news filtered through of the passing of John Durcan, better known as Saint Patrick following a long illness and not only his village of Cogaula is in mourning, the county he loved shares the pain of a great loss. Such is the greatness of his loss that it sent reverburations across the country where he was a very popular figure at GAA grounds all over when he followed the Green and Red of Mayo.

While Mayo have won two All Irelands in his life time, John, like all other devout Mayo supporters craved to see Sam come back to Mayo and he was ever present in many GAA grounds around the country, eccentrically dressed as Saint Patrick with humourous messages attached and was able to beat the bodhrán in support of his native county. When Mayo had plenty of heartbreaking moments in Croke Park, John would always use his famous motto, keep the faith and he would look forward to the next year with optimism.

John wasn't just confined to supporting his beloved Green and Red of Mayo; he was able to show his support to Fahy Rovers and Westport United, particularly in the bigger matches that they competed in.

From a Westport United perspective, the famous Saint Patrick outfit was worn with pride; not the famous Green and Red of Mayo that was broadcast all over television and the national media but he put on the Red and Black and the famous witty one liners posted on his clothing, the best one was St Patrick. Born to pray, likes to party, and he certainly knew how to party after a match; win, lose or draw. While John may not have seen a Mayo captain lift the Sam Maguire, he was present to see Brian Kennedy to lift the FAI Junior Cup back in 2005 and that was Westport's biggest All Ireland success on the sporting scene. John would always liven up the crowd at a game and his infectious humourwas endeared to all who knew him. Celebrity supporters are a rare breed and John Durcan was certainly the greatest celebrity supporter to come from this district and what a character he was, whether it was Buckley Park, the Sports Park, Milebush, McHale Park or Croke Park, that colour and exuberance would light up many a dull day.

Westport United would like to extend its sympathy to the family of the late John Durcan and may his gentle soul rest in peace.

Reposing at St. Aidan's Room adjoining St. Patrick's Church, Islandeady on Sunday (April 14th) from 5:00pm with the removal at 7:00pm to the Church. Requiem Mass on Monday (April 15th) at 12:00 noon with the funeral proceeding to Fahy cemetery. House private at all times please. Family flowers only. Donations, if desired, to The Irish Stroke Foundation c/o McGing Funeral Directors, Westport.