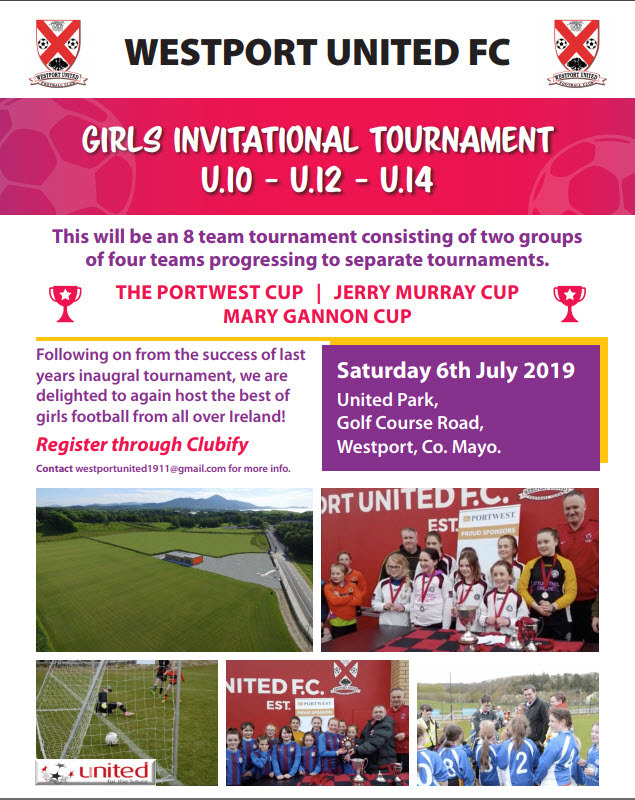 Westport United FC in association with Portwest Ltd is proud to host the Second Portwest Ltd Westport United National Girls Tournament at United Park this Saturday, with matches kicking off at 10:00am. This tournament is formatted into U.10’s, U.12’s and U.14’s age groups with two groups of four in each section. The top two sides in each groups goes into the Cup semi finals, while the bottom two sides goes into the Shield semi finals, thus each team is guaranteed a minimum of four games. All girls participating will receive a free t-shirt courtesy of Portwest Ltd as a memento of playing in this prestigious tournament.

The response from clubs since invitations were sent out for this inaugural prestigious national tournament has been overwhelming with plenty of interest and some of the confirmed teams participating on Saturday include Westport United, Boyle Celtic, Killala, Corrib Rangers and Monaghan United and all clubs foster a great tradition in the promotion and development of underage girls football within their communities.

There are two cups being named after former club members, now deceased. The Jerry Murray Cup is named after a former committee member, Jerry Murray, who served in the club for a number of years, along with his great friend, Tom Tarmey, who recently was honoured by the Mayo Association Football League with the Hall of Fame award. Jerry was a hard working committee member who did Trojan work in fundraising, namely when Westport United were running the football pools back in the 1980’s and Jerry was ever present at committee meetings where his voice on matters relating towards the club was respected by his fellow peers and he was admired by many of his club colleagues for his energy. Jerry also served on the Mayo Association Football League and was heavily involved in the development of Solar 21Park, Milebush. Jerry was a very well travelled supporter who would be anywhere in the country following the ‘Red and Black’ and was a regular in the Sports Park. Westport United is delighted that Jerry’s sister, Della will attend to present the Jerry Murray Cup on honour of her brother. The Mary Gannon Cup is named after whom then Chairman, Frank Gillivan once described at the Westport United AGM as the ‘Mother of the Club’. Mary was an important and respected committee member and was one of the first Child Protection Officers in the club, a role she held up to her final illness and at her passing in April 2010, she was one of the first ladies to have the Westport United flag to be draped on her coffin. Mary did help out with fundraising with the lotto, selling tickets out The Quay on Saturday nights with her son, Kenneth and was very helpful towards other fundraisers that Kenneth was involved in, most notably sponsoring the U.14s to travel to the Umbro Cup in Galway in 2008, the team that had Conor O’Malley, now the Peterborough United goalkeeper in their ranks as well as striker, Ruairí Keating now with Torquay United. Mary was also a great supporter, who was part of the ‘Asgard Bus’ brigade and travelled around the country to games. One of the proudest text messages she received on the train coming home from Kilkenny was when Kenneth text her to say that the FAI Junior Cup was been crossed over the River Shannon at Athlone. One interesting piece of fact is that Mary Gannon is the great-grand-daughter of Mary Duffy (née Hughes), Cloonskill, whose brother was Charles Hughes, who founded Portwest Ltd back in 1904. Westport United is also delighted to announce that long-serving member, Kenneth Gannon, the club PRO and youngest son of Mary Gannon will present the Mary Gannon Cup in honour of his mother.

Club Chairman, Myles Staunton said ‘Westport United FC is delighted to be hosting a Ladies Day at United Park and a lot of work has gone on behind the scenes to prepare for what promises to be a fantastic day with the best of girls football being showcased at United Park and I would encourage as many people to come down and watch a truly great exhibition of football and we are all excited to see some of the best clubs coming to Westport and they will receive the best Westport hospitality that we can offer’. Staunton added ‘This was a key goal by our club committee to follow up our successful girls tournament last year so that it is a permanent fixture in the club calendar’. He concluded by saying ‘The club is being grateful to Portwest Ltd for coming on board for this tournament and they have been a great help with their professional approach in making the tournament a reality’. On behalf of the tournament sponsors, Owen Hughes, Director of Portwest Ltd said ‘We are delighted once again to be partnered with Westport United as a sponsor of the annual girls football tournament at United Park. We would like to wish all the competitors the best of luck on what promises to be a fantastic sporting event here in Westport’.

Don’t forget it’s Ladies Day at United Park on Saturday and all the action begins at 10:00 when the first games kick off and both Westport United and Portwest Ltd wishes all the teams the best of luck and hopes that everyone has a great day and also encourages our local supporters to come to United Park and watch some great football on show.