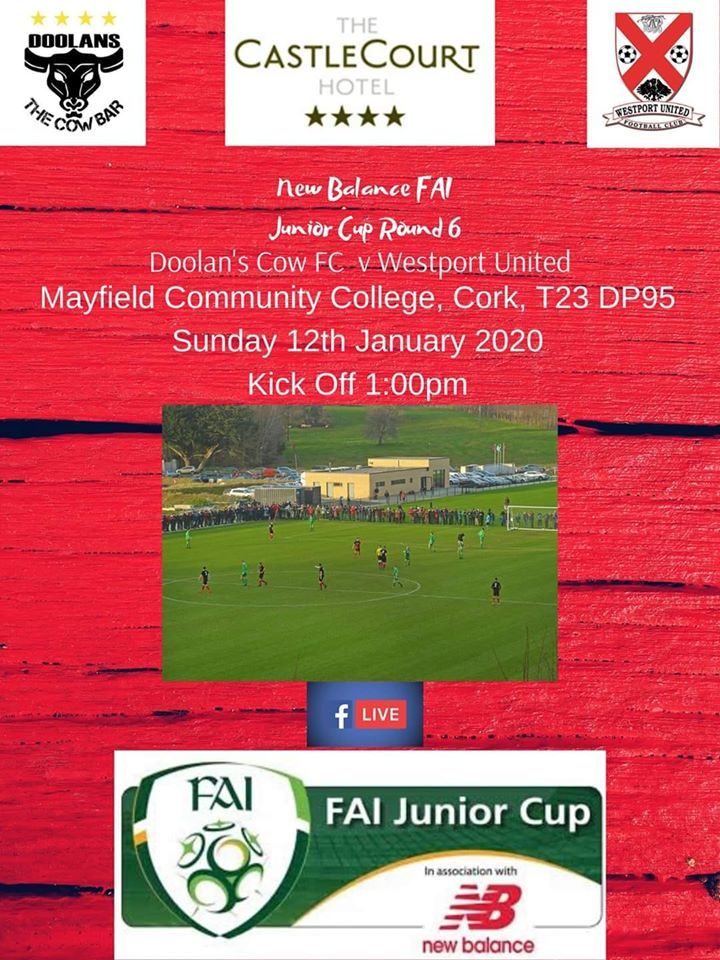 Westport United make the trip to Cork to take on Doolan's Cow FC in the sixth round of the New Balance FAI Junior Cup, looking to book a place in the last 16 of the prestigious competition.

Westport United reached this juncture following a 3-1 win against Balscadden FC last month while Doolan's Cow defeated Dublin's Valeview Shankill 3-2 on Sunday. For United, it's a trip into the unknown as their opponents, who play in the Cork Business League were only formed back in 2005 and few outside of Cork or Munster probably heard of Doolan's Cow FC but for this particular team to reach the last 32, they are obviously a very good team and one that must not be taken lightly and if Westport are to progress, nothing less than a high-calibre performance will be enough to get a win against a very dangerous side.

Westport have a couple of injury worries to contend with but Mickey Feeney's backroom team are working around the clock to ensure that everyone is fit and ready for the big match. United's preparations have been helped by a couple of behind closed doors challenge games where the squad was fully assessed for the task ahead and the management team are hoping that the games have produced the formula to success on Sunday.

The supporters bus for the match is practically full and supporters who intend to travel are advised to contact Brian Cusack on 085-1743002 to confirm that their name is on the list for the bus. The package is a return trip with B&B with one evening meal. Supporters who have confirmed their intentions to travel on the bus are asked to meet at the Castlecourt Hotel at 1:00 on Saturday to ensure a prompt departure at 1:30.

Kick off on Sunday is at 1:00pm at Mayfield Community College, Old Youghal Road, Cork, T23 DP95 and there will be a large crowd travelling from Westport so make sure you get out your flags, scarves and all sorts of Red and Black, make lots of noise and add your voice to the sound of the crowd. For supporters unable to travel, the match will be broadcast live on the Westport United Facebook page and we ask our social media followers to post messages of encouragement to the lads on Sunday.

1989 was a great year for Westport United underage as two...