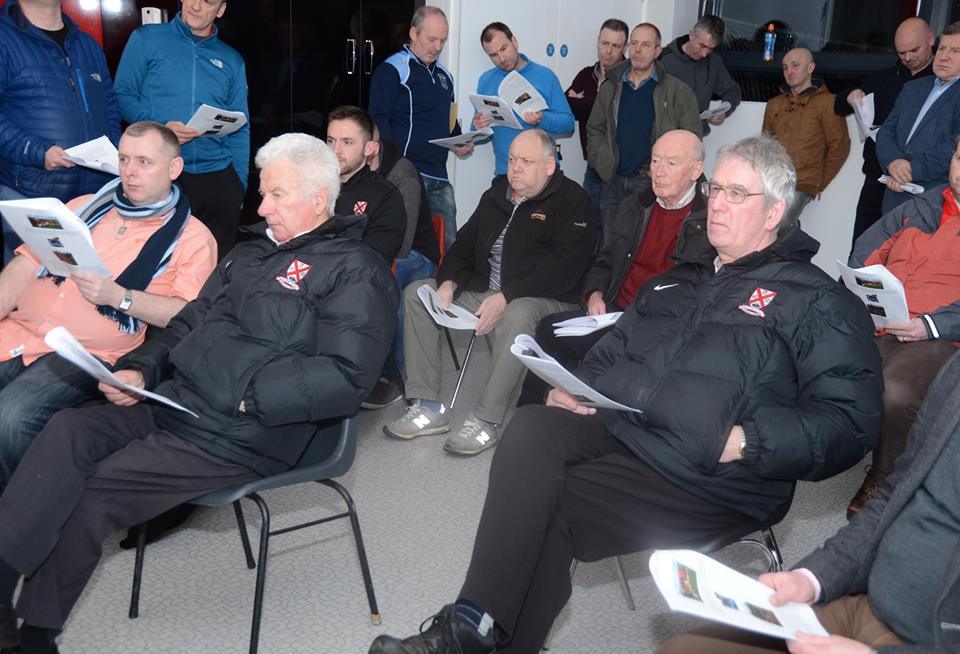 The Annual General Meeting of Westport United FC took place in a packed United Park Clubhouse and the meeting was opened with a very special tribute video in memory of all the deceased members of the club over the past decade and to the late Adam Mulchrone, while poignantly remembered, was applauded at the conclusion. The outgoing Chairman, Myles Staunton welcomed everyone to the meeting and described 2019 in many ways an extremely sad time for the club. Mr Staunton spoke particularly about Adam Mulchrone and Jennie Kilroy Durkan, formally informing the floor that it has been unanimously agreed following consultations and feedback to name the main pitch at United Park, the Adam Mulchrone Pitch and the club sees this as a fitting was to keep Adam's memory alive. Both Pádraig Burns and Gary Cunningham were thanked for their sterling leadership during what was an extremely difficult period for the club. The outpouring support from the football family across the country was appreciated by the club and that has been recognised by the Connacht FA in naming the Man of the Match award in the Connaught Champions Cup final the Adam Mulchrone Award. Moving onto Jennie Kilroy Durkan, she was remembered as a committed club committee member who always acted in the best interests of the club. When Jennie took on a task, everyone knew that it would be done amd she was always quick to volunteer. She did excellent work and her contributions were always forthcoming and appreciated by the club.

Mr Staunton outlined the club structure and described 2019 as a really busy year and the club continues to grow at a steady pace with 37 teams and over 50 coaches and that growth has taken the club to a level where to maintain a structure has become increasingly important and Mr Staunton was pleased that the structure of the club is established in a way where the underage set up is based in line with an underage charter established with best practice and tailored to meet the requirements of Westport United. The club has seen increasing membership with approximately 575 members and with the extra workload that's involved, positions that traditionally had one member now has an assistant to manage the increased workload and maintaining a clear structure where everyone knows their roles is vital so that going forward all the tasks are shared out equally. Last year, the club established a Games ans Coaching Committee and thanks are due to Frank Gillivan, Pat Foley and Paula Cannon for their work in dealing with issues during the year and Mr Staunton urged the incoming committee to retain this structure going forward. On the principle of fairness, the message from Mr Staunton wanted to send out loud and clear is that each child should be treated with fairness and enjoy their experience with the club no matter what their ability. We all need to remember that winning isn't everything.

Mr Staunton spoke about the facilities that are used by the club. The club was pleased to recognise the work of the Development Committee Chairmans, Kevin Cusack at the adult presentation night recently. Kevin and indeed all the Development Committee deserve great credit for the work in making United Park a reality. The club wishes Michael Horan well in his new role in managing and maintenance of the facility. The club recently approved funding which is needed to maintain the playing surface at United Park. The Development Committee has plans in the medium term to start looking at other facilities on the 13 acre site and the club committee will liaise with them going forward. In terms of The Point, a plan is in place to make sure that the club's position at The Point is protected. The Sports Park was addressed and while initially, the club, with justification were not happy with the lack of communication and input the club was allowed to give in respect to the new building at the Sports Complex, a new committee is now in place and seems to be working well. Thanks to Mick O'Brien and Michael McDonnell for representing the club on the Sports Park Committee which was a difficult task during difficult times and both were excellent representatives. Moving forward, Mr Staunton urged all members to make sure to play their part in terms of maintaining the upkeep by cleaning up after games and to make sure that Westport United plays a key role in the Complex going forward. It was pointed that the Sports Park is as important as ever and this should not be forgotten. McConville Park continues to be a useful playing facility for the club.

In terms of communications, Mr Staunton spoke about Clubify and how it represented a huge step forward and how it helped with club registrations and tournaments. Credit was given to Treasurer, Finian Gardner on setting up the portals and maintaining them while Kenneth Gannon was singled out for maximising its potential and deserves great credit for continuing the live streams of matches and key events to those not lucky enough to be present at them. In particular, Kenneth excelled with his work on the hosting of the UEFA International Development Tournament which received enormous praise by all international attendees. In terms of the WhatsApp groups for internal communications within the club, Mr Staunton urged members to use it primarily for logistics and to solve issues with a telephone call.

Mr Staunton gave a detailed and positive review of all events hosted by the club in 2019, the highlight was the successful hosting of the UEFA International Development Tournament which saw Conor Walsh, Daniel Kelly and Adam Nugent donning the Green Jersey in their own home town. A number of teams took part in outside tournaments and the various managers deserve great credit in being proactive and the message should go out to all coaches that if they come with an idea, the club will support it.

2019 saw the club taking huge steps in the promotion of the coaching and development of our youngest footballers with over 140 boys and girls playing in United Park every Thursday evening under the tutelage of Gerry Needham and his coaches. The success of last year will see two sessions per week in 2020 with more participation in blitzes and the club has agreed in principle to purchase new mini goalposts to enhance the sessions. The Football For All has become more established within the club and Mr Staunton is proud of how integral it has become within the structures. The programme is for boys and girls with physical and intellectual disabilities and it was humbling for Mr Staunton to meet with the parents and families and to be told how much the programme improved the kids' lives and they have spoken highly of Paula Cannon, Helen McGeough and all the coaching team whose work brightened the kids and the praise is striking and justified. Additional funding was received from the Mayo Sports Partnership for this section of the club which will help it to grow.

Mr Staunton confirmed that the club terminated its agreement with Teamwear Ireland during the year and is currently in discussions with another supplier. The club is looking to finalise a deal in advance of the new season and the committee is looking closely at this at the moment. Many thanks to John Casey for his efforts.

On the coach education front, Westport United is hosting the national UEFA B Licence session in February with thanks to Pat Duffy for bringing the course to Westport. Joe Kelly will be participating and the club wishes him well in his endeavours. However, it was pointed out that there was not as many courses for 2019 as there were in 2018 and Mr Staunton urged that the club engages with Niall O'Regan and Paul Byrne of the FAI to set out a coordinated plan for coaches going forward.

The efforts of the adult sides were recognised at the AGM with the B team congratulated for winning their division and Gary Cunningham, Darren Browne and Cillian McGlade recognised for their international achievements. The recent presentation night was highlighted along with a very successful Masters Season.

On the issue of finance and fundraising, Mr Staunton spoke highly of the club's financial performance but in terms of the fundraising efforts of the lotto, he starkly reminded the floor that the licence is for a seven day period and no organisation should have a God given right to one particular evening.

Rounding off his address, Mr Staunton thanked the outgoing committee for their work and support to him and the club, thanked Presidents, Sean McKenna, Peter Flynn Snr and Aiden King and junior managers, John Brennan, John Russell, Pádraig Burns and Mickey Feeney. He finished off by saying I have been privileged to be Chairman of Westport United. It is a great club and indeed it is a family. During my time as Chairman, we have seen good days and we have seen some very very sad days. However, as a club we have always stuck together and that what makes Westport United different. While I will not be on the committee, I will remain committed to the club, I will continue to coach the team which I have coached for the last five years and I have a son and daughter playing with the club who enjoy every minute of it. Finally, I would like to thank my wife, Lorinda, my three kids for their patience during my tenure as Westport United Chairman. I simply couldn't have done it without them.

Outgoing Secretary, Michelle Chambers outlined both the activities and achievements of every team in the club and wished the players in the ETP, Mayo and development squads the best of luck. She extended her congratulations to Gary Cunningham, Darren Browne, Cillian McGlade, Conor Walsh, Adam Nugent and Daniel Kelly on their international success in 2019.

The outgoing Treasurer, Finian Gardner gave a very detailed report and praised a great year and he thanked the assistance of members in fundraisers. He highlighted the need of an assistant Treasurer to assist with the workload. Following a tribute from Mr Gardner to the outgoing Chairman, outgoing Vice Chairman, Michael McDonnell, on behalf of the outgoing committee, thanked Myles Staunton for his service. In response, Mr Staunton wished Stephen Duffy well and spoke highly of a proud family tradition within the club and had no doubt that Stephen would make a great Chairman. The incoming Chairman, Stephen Duffy took the opportunity to congratulate the Development Committee for their great work and will use his term to ensure that both committees work and help together.

Vice President, Martin Keane thanked the club for their donation towards the Westport Food and Fuel Appeal and to the club members who helped out. He paid tribute to Myles Staunton for his work as Chairman of the club and congratulated the six internationals that represented their country. He spoke highly of Aiden King and and described him as an ambassador for the club. He thanked both Sharon Conway and Michelle Chambers for the reports and he paid tribute to Kenneth Gannon for his outstanding work as PRO and his live stream of matches and thanked him for his input in bringing Westport United to a wider audience.

There was a suggestion from the floor to set money aside for a rainy day fund and it's something for the new committee to look at and also highlighted a greater need for parents to be more proactive in club fundraising initiatives.

The following were elected:

1989 was a great year for Westport United underage as two...