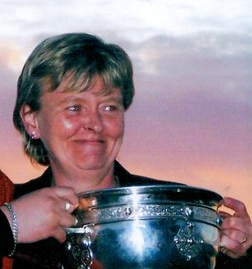 Ten years ago this evening, the word filtered through that the Mother of Westport United passed away following a five and a half month brave battle against illness. It was an illness that was fought with dignity and conviction and Mary Gannon was just less than two months shy of her 55th birthday, a young life taken away so cruelly less than tweleve years after her husband, Bertie passed away also at a very young age. It was a cherfully sunny evening as Mary departed Earthly life and entered Eternal life in Charlestown and as word filtered around Westport that Wednesday evening in 2010, it came as a shock to many as much as people knew that she was terminally ill. Following her passing, then-chariman, Frank Gillivan paid the following tribute on the Mayo News, saying “Mary was a great worker for the club. She may have been quiet on the sidelines but she worked tirelessly for the club. Every weekend, herself and her son Kenneth, our club PRO, would sell lotto tickets at the Quay. Mary had a way of getting people to part with money that was unbelievable.”

The following Sunday at her funeral Mass, this writer did a Eulogy and part of it read Only last December, at the Westport United AGM, Frank Gillivan called her the Mother of the Club, and it was a fitting saying as she was always on hand to render assistance at fundraising activities and she would go to Westport United games dressed in the Red and Black colours and was always one of the crew on the Asgard Bus. Only last year, when the U.14 team that I look after got to a Connacht Cup semi final and the SFAI Cup quarter final, she was there, and as a son, I was proud to see her there at the games, even in defeat. She even spoke of going down to the Kennedy Cup in Limerick for a day, unfortunately, she never got to see that, and I think that she would have enjoyed it. If there was junior games that I wasn’t at, she would inform me of their fortunes, and vice-versa. I remember being in New York in July 2003 and I phoned my friend in Connecticut that evening. He told me that Mary phoned to say that Westport United drew 1-1 with Castlebar Celtic. Her proudest day, like myself with Westport United was on the 19th June 2005, when Westport United won the FAI Junior Cup in Kilkenny and that evening, when we crossed the trophy over the Shannon in Athlone, I sent her a text of what we were doing and she was so proud of that particular text message. The players that won the FAI Junior Cup have a special place in her heart and she put on a tab for them to honour their achievement.

Frank Gillivan did call Mary the Mother of Westport United as he paid tribute to her at that particular AGM in December 2009; at the time, it was only weeks after she was diagnosed with her illness and she was undergoing radiotherapy and chemotherapy at the time. At that meeting, I was taking notes for the newspapers and that particular line caught my imagination, and it caught the local media thereafter with that title used to report her passing. She was a great help in selling the Westport United lotto tickets out The Quay on Saturday nights and it made my work easier. There was a very established clientele that expected us every week and there was never a need to ask them to buy a ticket; it was just an automatic instinct to get one and every Sunday night after the lotto when I came home, she would always ask Any winner? and I'd usually say no. Then she would always follow up with the question that did I have any winners (the 3x€20 winners) . Her help in the fundraising didn't just stop at the lotto; back in 2008, we took our underage team to the Umbro Cup in Galway and she was brilliant behind the scenes to ensure that the kids got the opportunity to play in that tournament and she really came to the fore for the barbecue night which was a great night at The Quays Bar.

Mary was part of the famous Asgard Bus that travelled to the Westport United games around the country and she would often share stories about the fellow travellers on the bus. She would have worn the red and black scarf and she had a red jacket with black buttons on it and this made her recognisable at the matches. When she spoke about the Junior team at the time, she singled out Martin McGreal as my man and the day he saved a last gasp penalty against St Peter's in Athlone, she was in London and I told her about this great penalty save and not only she was delighted, she also asked me to pass her regards onto him. Despite this, she knew all the players and she would have bought the squad a drink whenever they won a league or a cup and the lads might have been taken aback by her generosity, none of them ever exploited her and every junior player had the greatest height of respect for her. Not only she would travel to junior matches, she would also travel to some of the underage games involving myself and Jim Rocliffe and she would regularly speak about Conor O'Malley, Ciaran McFadden, Killian Browne, James O'Donnell, Alan Rocliffe (nephew), Darragh Connolly, Glen Hastings, Paddy Glavey, Padraig Keane, Tomas Kelly, Alan Carroll, Liam Moran and Ryan Feehan and she had a great interest in all the lads collectively and she would always look out for them. The day our U.14 team were due to play Belvedere in Dublin, Killian Browne got injured and was out of the match and I recall how devastated he was and Mary really showed that Mother of Westport United qualities with him that day; she was truly brilliant with Killian. Mary was also the Child Welfare Officer at the club at the time of her illness and her attitude with the underage was that the kids, irrespective of ability, gets game time. She did not care whether they were brilliant or couldn't kick snow off a rope so long as every kid was treated fairly and she always hammered that point with me. She hated kids left on the bench and lucky to get the last minute of a match. Luckily enough, she never had an incident, per se to deal with but if there was ever a case of abuse, and thank God there wasn't, she would have listened to the kid's story and she would most certainly not sweep it under the carpet.

The last games that Mary was at that I can recall were as follows. The last timne she travelled in the FAI Junior Cup was to Cork in January 2009 when Westport United defeted Dillon's Cross 3-2. I was in Liverpool that weekend and she was giving me the updates and managed to get one of the goalscorers wrong and I was none too pleased over that mistake. The last underage trip she made was to the aforementioned Belvedere game in Dublin and Belvedere were much too good for our lads that day but she was proud of the lads. The last Connaught Cup match she was at was a very controversial match where we lost to West United and this writer is usually mild mannered at football matches but this was one angry ant after the match and I even made my feelings clear to the match officials what I thought that day, I was that incensed. The last trophy she saw Westport United win was the Connaught Senior Cup after an extra time win against Athenry FC and she was delighted as much as I was with that win. The last match she ever attended was the FAI Junior Cup match at home to Manulla and we lost that one and she was not pleased with the performance that day. The last ever Westport United function she was at was only less than a week before she was diagnosed. It was a fundraiser in the Castlecourt Hotel and there was a surprise presentation lined up for her and she knew nothing about it. I was under orders to keep my mouth shut. She didn't even want to go to it and she wasn't in good form that day nor she looked well. She did go at my insistence and I recall Joe Ring saying to me that she complained of being tired and Frank Gillivan thought that night that she had the flu. Mary got presented with a framed and signed Republic of Ireland jersey by Frank Gillivan and Martin Keane and despite feeling so unwell that night, she was honoured to receive the framed and signed jersey. After her passing as she left Horkan's Hill one last time, the U.18 team were supposed to play Salthill Devon in the semi final of the Connaught U.18 Cup in the Sports Park but there was no game. The players, managed by James Fahy and Shaun Tagg had a training session instead and when the cortege passed by the Sports Park that afternoon for McGing's Funeral Home, the players poignantly paused in respect of honour of a lady and also, Mary became the first woman, in my knowledge to have a coffin draped with the Westport United flag.

Today is a poignant anniversary marking the ten years since her passing and with the current COVID-19 restrictions, this meant watching the Anniversary Mass on Facebook Live as opposed to being at the Mass itself and the tradition of going out to the grave for 5:45 wasn't possible either so I just went to the Church, lit a candle, said a prayer and remembered her in my own way. She is no doubt missed but she is never forgotten. There are others in the club who knew her closely that would have remembered her in their own little way.

I'll just sign off with this poem for her

We remember the Mother of Our Club

A lady with a heart of gold

We thank her for the service she gave

Dearly to both young and old

She was proud of the Red and Black

Wherever they played across the land

While the team would win, lose or draw

Every player was embraced in the palm of her hand

We have an exciting Manager/Head Coach opportunity for ou...

The FAI Summer Soccer School Camp will be hosted by Westp...

Westport United would like to place on record a huge than...

CLARIFICATION ON MATCH TICKETS FOR SUNDAY

As you are all aware, Westport United take on Oliver Bon...