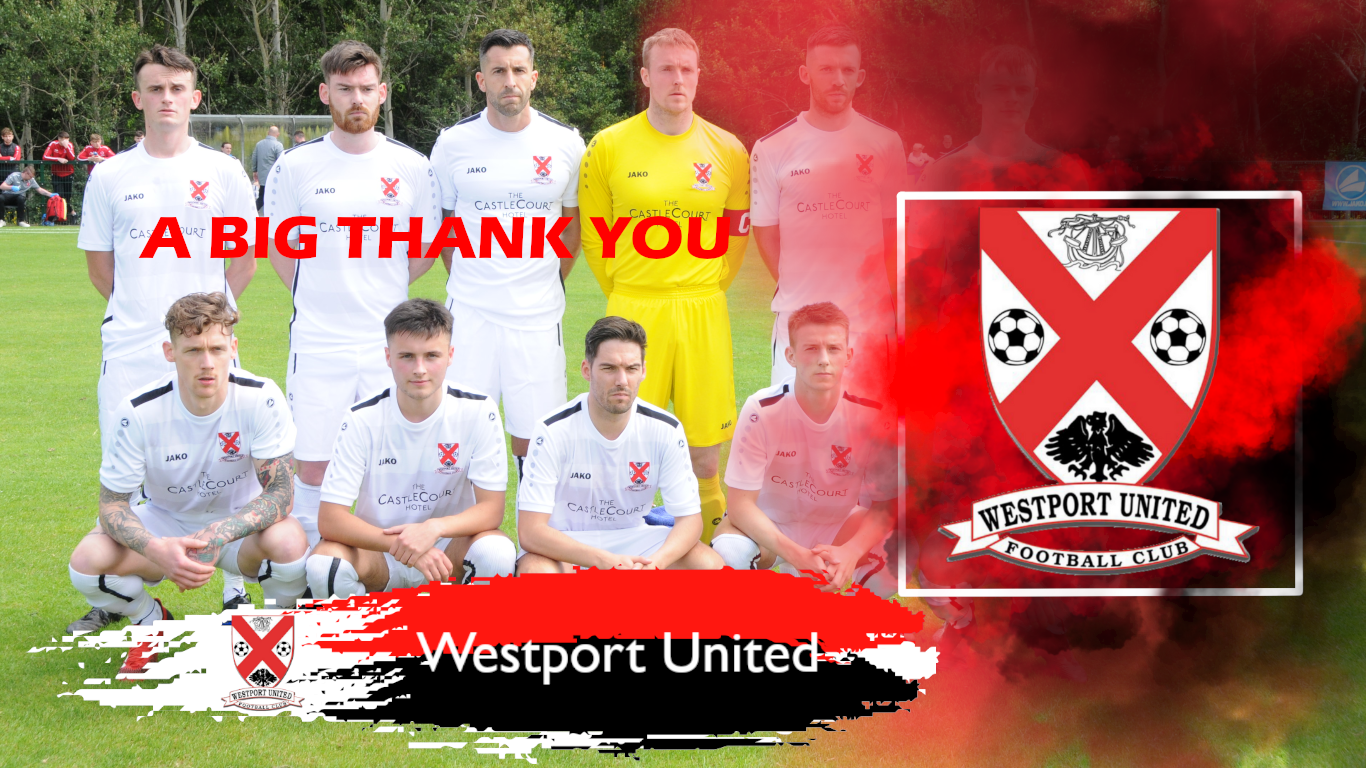 Westport United would like to place on record a huge thank you to the supporters who stayed at home for yesterday's FAI Junior Cup match against Oliver Bond Celtic. Unfortunately, the kick of the ball didn't favour us on this occasion but the men that represents the Red and Black and the town certainly gave us some memorable moments once again as they provided valuable entertainment and provided a boost to the morale of the local community. For many of our supporters, it was truly a difficult decision to stay away from United Park but the sacrifice that was made by staying at home and following the match on social and broadcast media platforms was much appreciated by the club and we are extremely grateful for for your patience and understanding while we would have welcomed up to 1000 spectators in normal circumstances. The sacrifices made yesterday will help ensure that huge crowds will once more flock to our flagship games.

It was not our intention to live stream the game ourselves but to share the stream from Striker Online but we ended up streaming the match as back up to Striker Online and the match ended up with record viewers on our coverage with 842 watching at its peak with an organic reach of over 15,700 people and just under 1800 engagements during the game and once again as always posted at the end of each game, many thanks for everyone tuning in and showing your support to the lads from wherever you were watching around the world and also many thanks for the comments posted in support of the players during the game.

Many thanks to Eamonn Scott and his team from Striker Online for their own production and we would go on record to apologise for the connectivity issues that was experienced on their stream. They have a fantastic highlights show on their Facebook page so that everyone can look back over again. Striker Online is huge supporters of amateur football across the country and the work they put in to promote the game is something that cannot be overlooked and Striker Online will always be welcome to United Park in the future.

There were supporters without access to social media and many thanks to Michael D McAndrew and his team from Mid West Radio for supplying the live commentary of the game and many listeners would have tuned in to follow the afternoon's proceedings, cheering on the Red and Black. Mid West Radio to be fair, doesn't get many opportunities to cover football matches live but when the opportunity arises, they are not found wanting and we will welcome our broadcast media friends back to United Park when they look to cover one of our games in the future.

Just as little as four years ago, bringing live streams of football matches was unheard of but the creation of Facebook Live has really opened up opportunities for football clubs to showcase their flagship teams to a wider audience and with the challenging times we face, the service is of much more importance to our supporters than ever before and Westport United will continue to lead the way in providing an excellent service to bring everyone closer together.