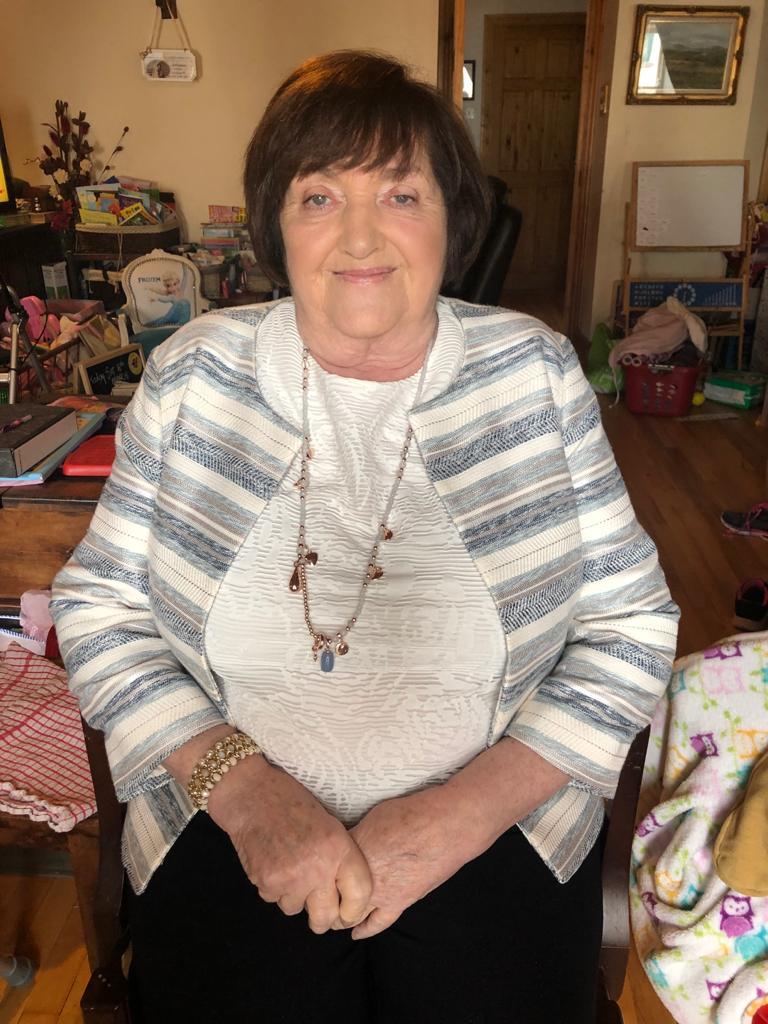 It was quite fitting in so many ways that when the funeral cortege stalled this morning (Monday) to pay its respects outside Kay Curry's home on James Street that so many strands of her life were all there in front of us to witness. Her family home that she shared with Martin (RIP), her children, her grand children and her bakery and cafe that has been the heartbeat of the James Street community. We looked on as her friends performed an impromptu traditional Irish dance; an act that would have had her and Mairt smiling with joy such was their love of the tradition.

Then as we glanced upwards there was the red and black flag flying proudly. She loved that flag and even when her health prevented her from being a presence on James Street there was an insistence that the flag flew high. She understood its significance to her town, its community and to her own family. Kay was mother in law to Joe Lawless (Martine's husband) and as Martine  herself said during the Funeral Mass she was so proud of him. She was proud of all the lads that played but Joe was special in Kay's mind and no one dared say anything bad about him at a match within earshot of Kay. Not that there was ever any need to but all the same there was nothing said.

We got used to seeing Kay at matches in the Sports Park and in latter years when her health allowed, in our new home at United Park. She was never on her own. Martine was always with her but so too were her grandchildren, especially Mason, who loved to see his Daddy play. Kay would sit on the bottom row of the steps in the Sports Park close enough to the half way line and always alongside stalwarts such as Peter Flynn, Sean McKenna and Frank Dolan. And Kay never arrived empty handed and she shared what she had with those around her. And listening to her children and those who knew Kay so well we should not be surprised that she shared so much. She shared all she had.

We loved having Kay as our friend and supporter and when she was able to make it to United Park in recent years it was a given that Kay would have the best seat in the house. There's an image in the mind of Kay with Martine and her children alongside her and Joe over chatting to them after every match that will always linger. It didn't matter the score (well it did to Joe) of the game but there was something reassuring about everything being in order when they were there together.

It's an image of Kay that should stay with us. We don't know when we'll see a game of football in United Park again but when we do get back there we should pause and look around and imagine Kay sitting there with her huge smile and her family all around her. It's where she was happy and we will remember that when we get back to United Park.

May her beautiful and gentle soul rest in peace. We will miss her dearly.

From all her friends in Westport United Football Club.

This month is Autism Awareness Month and Westport United ...

HAVE YOU GOT AN INTEREST IN FOOTBALL?DO YOU ENJOY WORKING...

Statement from Mayo LeagueAs you are aware the Mayo Lea...