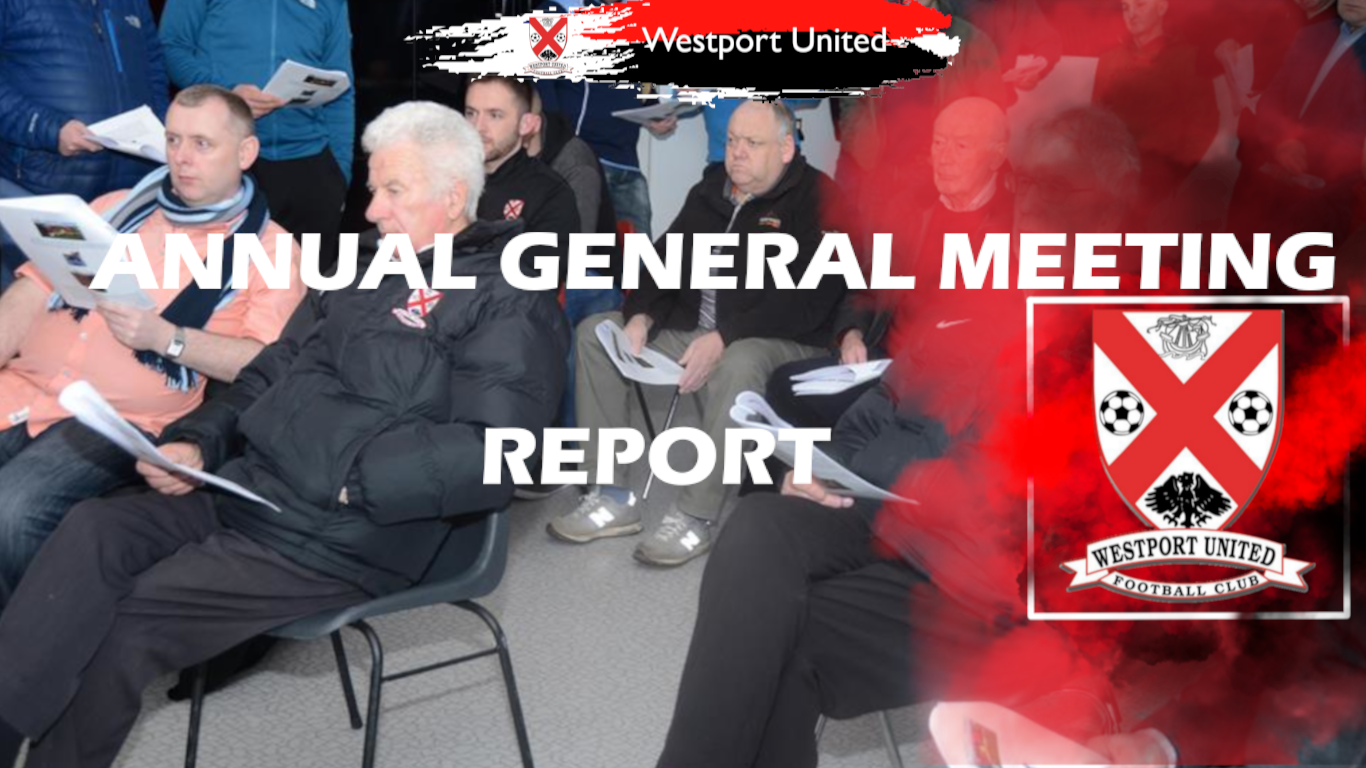 The Annual General Meeting of Westport United took place recently and for the first time since 2020, it was held in United Park and it was very well attended.

The meeting was opened with a minute's silence for all the deceased club members over the previous year with special remembrance for Aiden King, Martin Keane and Sean McLoughlin followed by the adoption of the minutes of the previous AGM.

In his Chairman's Address, Stephen Duffy opened by recalling the great news on August 18th when it was announced that the club would receive €2.8 million from the Immigrant Investor Programme towards the Phase Two development at United Park. Mr Duffy did highlight the fact that the club had to raise a percentage as a condition of the funding and he pleaded with members to support the club's fundraisers to help get the project over the line. Mr Duffy thanked everyone who invested their time into the project.

Another red letter day was the presentation of the FAI One Star Award that the club received on July 7th. It was a great evening and Mr Duffy thanked the coaches, the committee and especially to Victoria Large and Mark McDonagh, the Club Mark Officer for getting the award over the line.

United Park didn't just host football matches over the last year; it hosted coaching courses, Football For All, the Hastings Insurance Academy and as Mr Duffy highlighted the Westport United Nursery which ran during the summer and the Mayo College of Further Education, which hosts a groundskeeper course at United Park and the facility benefitted through the donation of equipment. One of the students on the course is Brian Coffey.

The last year was a difficult year for the people of Ukraine and a number of people have came to Westport from the war-torn country. A number of Ukrainians have joined the club since settling in Westport and Mr Duffy said that it was great to welcome the Ukrainians into Westport United and wished them well.

As part of the Annual Santa Dash, the St Stephen's Day match between Westport United and Westport GAA Club took place in United Park with a cup in memory of Martin Keane. The match was very well supported and Westport United won the game on penalties after a 4-4 draw. Mr Duffy congratulated everyone involved in the organisation of the game with special mention to Donal Fahy.

Once again, the numbers of underage footballers in the club has increased, which meant so many more teams being entered into competitions. Mr Duffy was delighted with the extra numbers and pledged that the club would support more coaches to help cater with the demand through assisting them in coach education programmes and garda vetting.

Mr Duffy congratulated the three junior teams. Congratulations were extended to the Juniors on defeating Ballyheane 1-0 to win the Calor Gas Super Cup and to the B team on making history on being the first B team on winning the Connaught Shield against Knocknacarra FC. Congratulations to all the managers and backroom staff on each team. Mr Duffy highlighted the managerial changes throughout the season and thanked all the managers for their efforts. Following a recruitment programme just before the Christmas, the club appointed Kevin McNamara and wished the new manager and his backroom team the very best of luck. Mr Duffy also announced that the club will enter an U.21 team in the coming season.

The Santa Dash, despite some challenges with the cold weather and postponements due to same, was a success and Mr Duffy thanked all the teams for for getting involved and also thanked Kenneth Gannon, Michelle and Maura O'Toole who walked from Solar 21 Park to United Park.

Mr Duffy concluded his address by thanking everyone involved over the last 12 months and wished everyone a happy new year.

In her report, Victoria Large thanked everyone for their efforts over the last year and gave a comprehensive report on all the club teams that partook in the activities of the club and how every team performed throughout the season.

The outgoing Treasurer, Michelle O'Toole gave a very detailed Treasurer's Report. Ms O'Toole, highlighted a need of a greater input from members in the sale of lotto tickets, the lifeblood of the club and there needs to be a discussion to improve sales, particularly with extra teams and the impending Phase Two developments at the club. The outgoing Treasurer was thanked for all her work in managing the club's finances. A proposal from the floor to have the Club Lotto built into the registration portal or to get more parents proactive in selling lotto tickets.

In the Development Committee Report, Michael Horan and Peter Flynn both spoke on the €2.8 million announcement and gave an update on what has happened since August and the plans for the year ahead on the clubhouse extension, 4G floodlit astroturf with floodlit astroturf cages, third pitch and training area. It is hoped that the full project will be completed by Spring 2024. However, to help with the forthcoming development to ensure its progress, the Development Committee is looking for more patrons to sign to the Westport United Patron Scheme.

There were two motions put forward at the AGM. The first motion that there would be no less than nine members on the Club Management Committee but that each position has a specific role and following a brief discussion, the motion was adopted. The second motion was the establishment of a working group to be established between all groups within the club to do a study to find out where the club is in its footballing development, evaluate and plan a development pathway for our players and coaches. Following a the discussion of its merits, the motion was adopted.

The floor gave their appreciation to the Committee for all their work.

The club was informed of the new FAI Comet app and registration portal. The new system includes the uploading of profile pictures for all registered players and going forward, all match cards on matchdays will be done through an app.

A special birthday was recognised as Peter Flynn Snr was honoured with a birthday cake being presented.

The meeting concluded with the following quote: 'Let's be United and let it be a great year.'