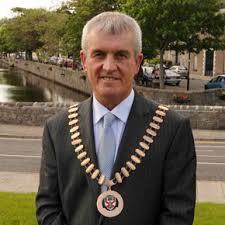 Published: about 4 years ago

It is with deep regret that we announce that former Westport United player, coach, committee member and Chairman, Ollie Gannon has passed away following a battle with illness, fought with courage and good humour.

Ollie came from a family with a tradition in Westport United. His father, Bertie served on the committee for a number of years and was Vice-Chairman at one point. Out of Ollie's siblings, Austin played for Westport Crusaders and Damien, like Ollie, played for Westport United reserves. Ollie's nephew, Kenneth carries on the family heritage, being the club's Public Relations Officer and another nephew, Darren has played for the Club's Premier Division team.

Ollie's connections to football wasn't strictly Westport United; like most of his family, Ollie had a huge input into the development of McConville Park as a football pitch and a community facility for the residents of the Cathair na Mart Estate and that facility over the years honed the talents of many footballers to wear the Red and Black or just to have a kick about for recreational purposes and Ollie would have been proud of the talent that played on McConville Park over the last forty plus years and went on to represent Westport United with distinction.

While Ollie only had a very modest playing record, playing with the Westport United Reserves, Ollie had a fantastic record as a coach. A number of the FAI Junior Cup winning side of 2005, including Team Captain, Brian Kennedy played underage football under Ollie and Ollie was manager of the Westport United U.15 side of 1988/89 that won the Mayo League, Mayo Cup and Connaught Cup. Twenty two years later, his nephew Kenneth was involved with the Westport United U.16 side that emulated that record. Ollie's coaching wasn't just confined to Westport United; he was involved with the Mayo Kennedy Cup side of 1990/91 alongside Johnny Burke (Snugboro United), Brian Johnson (Straide and Foxford United) and Michael Webb (Ballyhaunis). Former Republic of Ireland underage international, Simon Webb was involved in that squad.

As a supporter, Ollie travelled far and wide across the country and was at many big games over most of his lifetime, having saw United win the Connaught Cup in the Sports Park in 1974 and in Terryland Park, Galway in 1987 and 2012, the Connaught Senior Cup in Milebush Park, Castlebar in 2009 and also the FAI Junior Cup at Buckley Park, Kilkenny in 2005 plus many domestic honours at Mayo level. The pinnacle of all the success stories was undoubtedly the day when Westport United won the FAI Junior Cup in Kilkenny and when the trophy was brought over the River Shannon for the first time by a Connaught team in 76 years, Ollie was part of the cavalcade that carried the famous cup over the bridge in Athlone, an iconic picture that adorns the clubhouse at United Park. During the away trips, Ollie was always in great form and would always be up for a song when prompted and fellow supporters often enjoyed "rowling" with him. Ollie had many a great story to tell about legendary days in the past and now there are many fellow supporters and club colleagues that will tell some remarkable and funny stories about Ollie on the away trips.

Westport United FC would like to extend a Vote of Sympathy to the family of the late Ollie Gannon and may his gentle soul Rest In Peace. Funeral details to be published later.

On Bank Holiday Monday the 31st of October Westport Unite...

Become a Patron or Make a One Off Donation