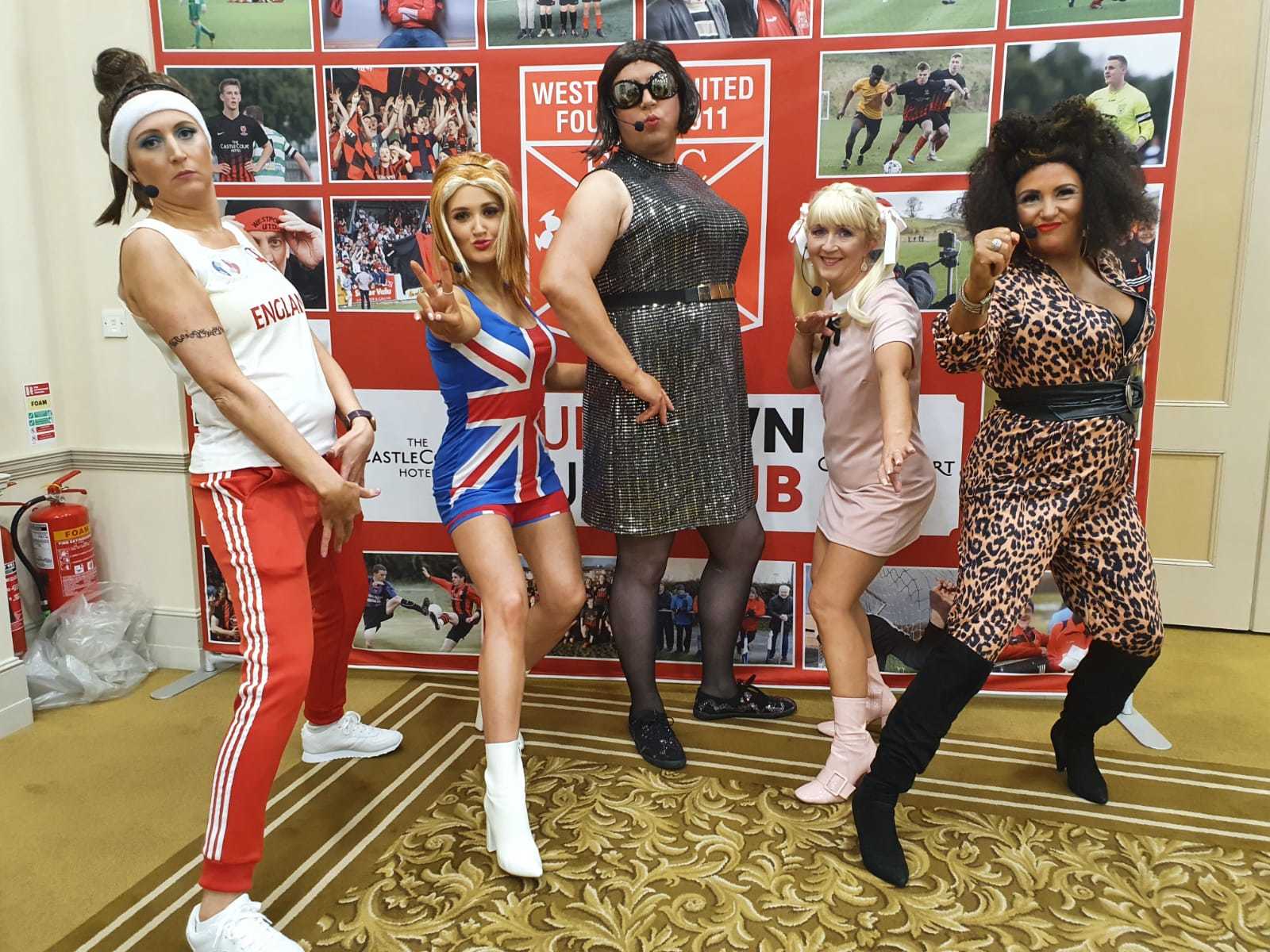 Spice Girls triumph after another great night of entertainment

EARLY last month, before the full affects of the Covid-19 pandemic hit with such ferocity, Westport’s ‘Stars in their Eyes’ hit the big stage for the last time on Saturday, March 7. As in previous years, the show didn’t disappoint and there was well over two hours of laughter and fun in Knockranny House Hotel, all raising funds for the continued development of United Park. As has become customary, the evergreen MC Dermott Langan was the man to try and manage all, as ten acts took centre stage. Dermot was accompanied by three well-known local judges, Catherine ‘LoLoLo’ Mahon; the ever subtle Jim Reynolds from Drummindoo Central and Francis from Cavan (apparently a relation of Declan Askin!).

First act up on the night was the Spice Girls, showing the Walsh lads from Knockfin how to really ‘spice up their life’! In the middle of the act Paul ‘Posh’ Kelly (with handbag!) stumbled out of some corner to join the Spices. Word has it the Walsh ladies of Trish, Fiona, Lorraine (O’Malley) and Eileen had to initiate radical social distancing from Posh during rehearsals! Next up was Mick Cunningham, doing the Derrygorman version of Flashdance. Thankfully Mick didn’t opt for the legwarmers and tights but did give us the full perm and welding gear look. Word has it that the crime rate in Tubbercurry has tumbled in the last three weeks since news of his act went viral in the Sligo area! Act Three saw on stage/on field regulars Liam McNamara and Pat Foley do the Covey version of The Blues Brothers, accompanied by some dubious members of Westport Town Band. In a truly memorable performance they had the audience rocking but fairly understandably had the judges raising question over the quality of their knees and eyesight! Next up was Bananarama with Patricia Prendergast, Rose Needham and Breege Sheridan rocking the 80s looks. When Faye, Venus and toy-boys arrived on stage, bouncers had to be called to calm Catherine Mahon and a few other local ladies. The last act of the first half of the show was expected to be Des Cafferkey doing a solo but this turned into a near riotous situation when old-timers Mickey Carney, Tom O’Flynn, Cathy Quinn and a host of other stars turned it into an AC/DC extravaganza. Between the short pants, the long hair and a heap of pipes it really did demonstrate that “it really is a long way to the top”!

First up after the break was Sir George Mortimer as the Carrowholly version of Rod Stewart. Any doubts that George was ‘truly sexy’ were extinguished quickly when he rocked up in his best skintight leopard number. Rumour has it that his neighbour John O has since borrowed the pants for his next live show in Buckfield! Next up were well-known Westport ladies Eithne Ring, Sandra Sheridan, Denise Blaq and Claire McKeown doing the ‘Jersey Boys’ (not girls). With former winner Joe Ring choreographing from the front row, the crowd were treated to a brilliant medley of ‘Sherry’, ‘Big Girls Don’t Cry’, ‘Bye Bye Baby’ and finished it off by telling Joe to ‘Walk Like a Man’! A man of many talents, best known as Fr John Kenny, was next up as the Partry version of Elvis. As one would expect Fr John treated us to some hip movements and big moves not witnessed in Mayo since Conor Mortimer retired! He was ably accompanied by Tracy Duffy from Tourmakeady, showing the Westport ladies how to dance to a Casanova! The penultimate act saw Gloria Gaynor, better known as Conor Farrell, ditch his stethoscope for high heels to take on the aptly named ‘I will survive’. All went downhill after Daniel Conway was plucked from the audience to be quite literally manhandled, the crowd were afraid, then petrified before Conor left the stage! The final act saw was the most unique act of the evening when Joe ‘Cosy’ O’Malley appeared as Princess Elsa. The audience managed to get over Joe’s blond pigtails but were truly ‘Frozen’ when the four snowdrops in white long johns landed out on stage, apparently they appear on rugby fields known as Liam Scahill, Des Reidy, Liam Moran and Pat Conway. The Bulls will never be the same after this outing!

To round off the evening and before the audience and judges determined the overall winner, the crowd had the dubious pleasure of watching Stephen Duffy, Pat Grady and Michael Horan perform their 2019 winning act of Beyonce’s ‘All the Single Ladies’. A year certainly didn’t help in the leg or waist department but there was no doubting the pedigree of the former winners. With such a variety of great acts it really was impossible to predict the winner, so when the Spice Girls were declared the overall winners there was no one more astonished than the winners themselves! Any of the acts would have been worthy winners with some fabulous performances, but everyone was then treated to the encore - and Paul Kelly’s legs going from underneath him, there was no doubt the audience picked the right winners!

HUGE credit goes to Judy Doyle who was the choreographer for all the acts and to Tia Crowley as producer, aided and abetted by an amazing backstage team looking after costumes, hair, makeup, staging, cameras, lights, music and so many other parts to make for another great show. The Chairman of the United Park Development Committee, Peter Flynn, confirmed since that this was the last Stars show. “We have had some amazing acts over the last four years with past winners Fr Charlie, Joe Ring and his crew, Beyonce in 2019 and this year The Spice Girls. There have been many memorable moments, who will ever forget Conor O’Neill on his wrecking ball when he tried his best to bring down the house! “Over the four years we had nearly 40 different acts, all of whom brought their own personalities and dubious talents to the show. Sadly one of the acts is no longer with us but he certainly won’t be forgotten. We are truly grateful to all the people who took to the stage, the businesses/individuals who sponsored all and the people who put the show together. We also thank the Castlecourt and Knockranny Hotels who provided fantastic facilities and most importantly, all of the audience who turned up in their droves every year. This might be the last Stars show - but we hope to be back in 2021 with something new - so keep watching this space”

The highlights of the show can be viewed on the following link - https://www.youtube.com/watch?v=nc5Hb7XXIGA

There is no charge to view it and all we are asking is for people who enjoy the video it to purchase a Two Euro lotto entry (Jackpot €18,700) which will help us to continue to develop the rest of the site - https://westportunited.clubifyapp.com/draws

Note: Unfortunately we couldn't show the ACDC performance because of copyright issues with the song.