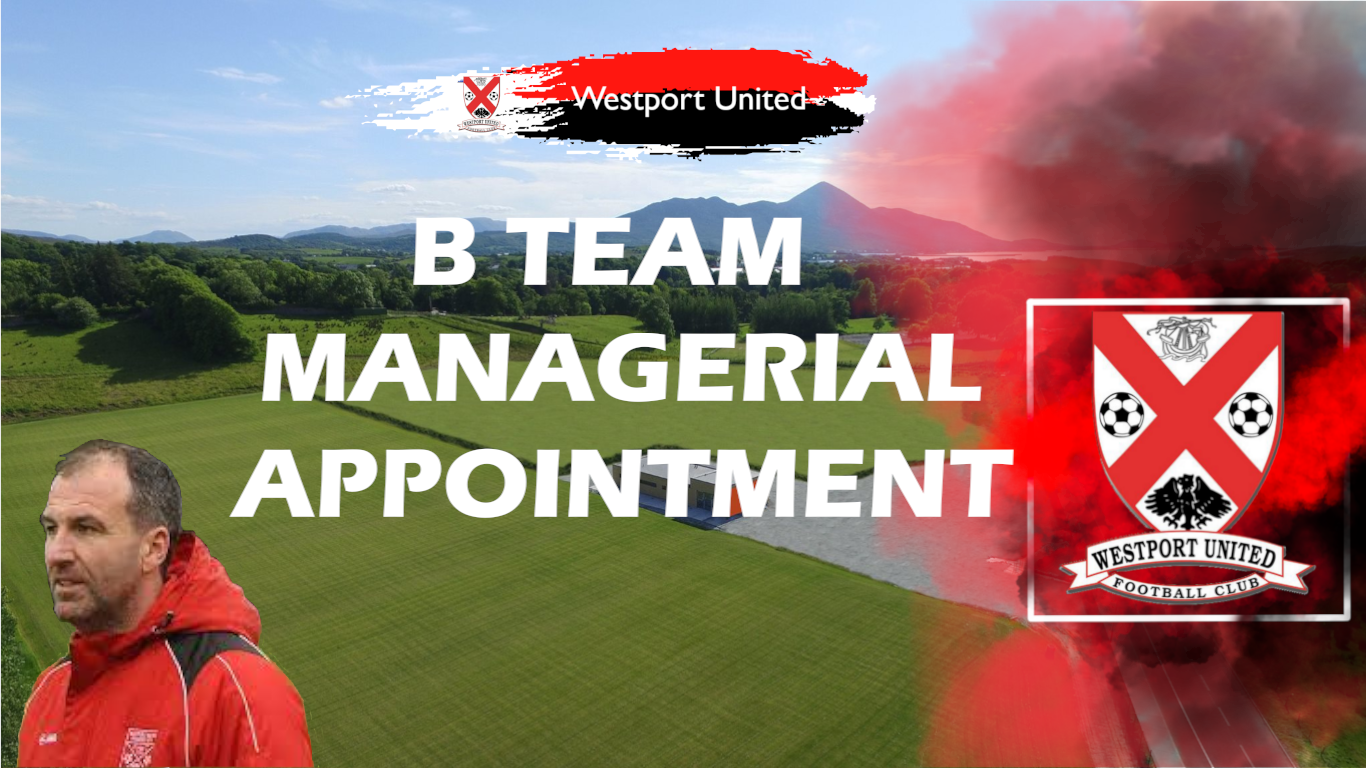 Westport United FC is delighted to announce that Joe Kelly has been appointed as the new manager of the club’s Premier League team with Eamon Daly joining as Assistant Manager.

Joe’s recent coaching background at underage level is of the highest calibre, having coached underage teams at club and county level, winning many honours at club level and also winning the SFAI Regional Cup Final at different age groups he has guided teams to SFAI Cup semi-finals.

At county level he took Mayo to the Kennedy Cup and was manager of the Mayo U.12 team that won the SFAI Inter League title back in 2014. No Stranger to coaching at Junior Level either Joe was a successful Player/Coach in the previous Premier league winning team Under then Manager Dave Lyons in 2006.

Joe has been working on obtaining his Coaching Qualifications over the past number of years and after reaching the Highest National Qualification he is due shortly to obtain his UEFA B License and in doing so will become to date the only Westport United coach to attain such a prestigious acclamation.

Joe is well noted for his meticulous preparation and possesses excellent organisational and implementation skills to ensure his teams are rehearsed in the finer points of the game. Joe was also the brainchild behind the club's underage charter to streamline the development of our underage talent and was also behind implementing coach education programmes for different coaches in the club.

This appointment is a continuation of the Player and Coach progression philosophy that the Club is implementing with all our teams.

When asked about his appointment Joe said:

“When I was approached by the Chairman, I had to take time to consider as I hadn’t planned on a move from the underage structure at this point, but I gave it serious consideration and think it is probably the right time with many of the players from our very successful underage teams moving into Junior Football. It is important their development is further nurtured with a gradual introduction into Mickey’s Super league team.

It is great to have Eamon Daly on board with his experience in Junior football and as an ex-team-mate we know each other quite well having won a Premier league together previously.

I am also delighted that Kieran Mulchrone and Micheal Gibbons have agreed to stay on as Fitness Coach and Goalkeeping Coach respectively, this will give continuity going into this new season.

We are looking forward to the challenge and to get going and see football return to United Park as soon as its safe.

“I am really looking forward to getting back involved with Junior football and working with Joe and the rest of the team, I have seen first-hand some of the Young talent coming through the club and it is great to get an opportunity to work closely with them”

The club would like to wish Joe and the Management team all the best for the season ahead.

With the return of football well under way, the closing d...

Today Our Club is delighted to announce that Hastings I...

Westport United FC are delighted to learn that he Footbal...

Westport United is delighted to announce the start of our...

Following the announcement by An Taoiseach, Micheal Marti...

It has been a long time coming and everyone here at Westp...