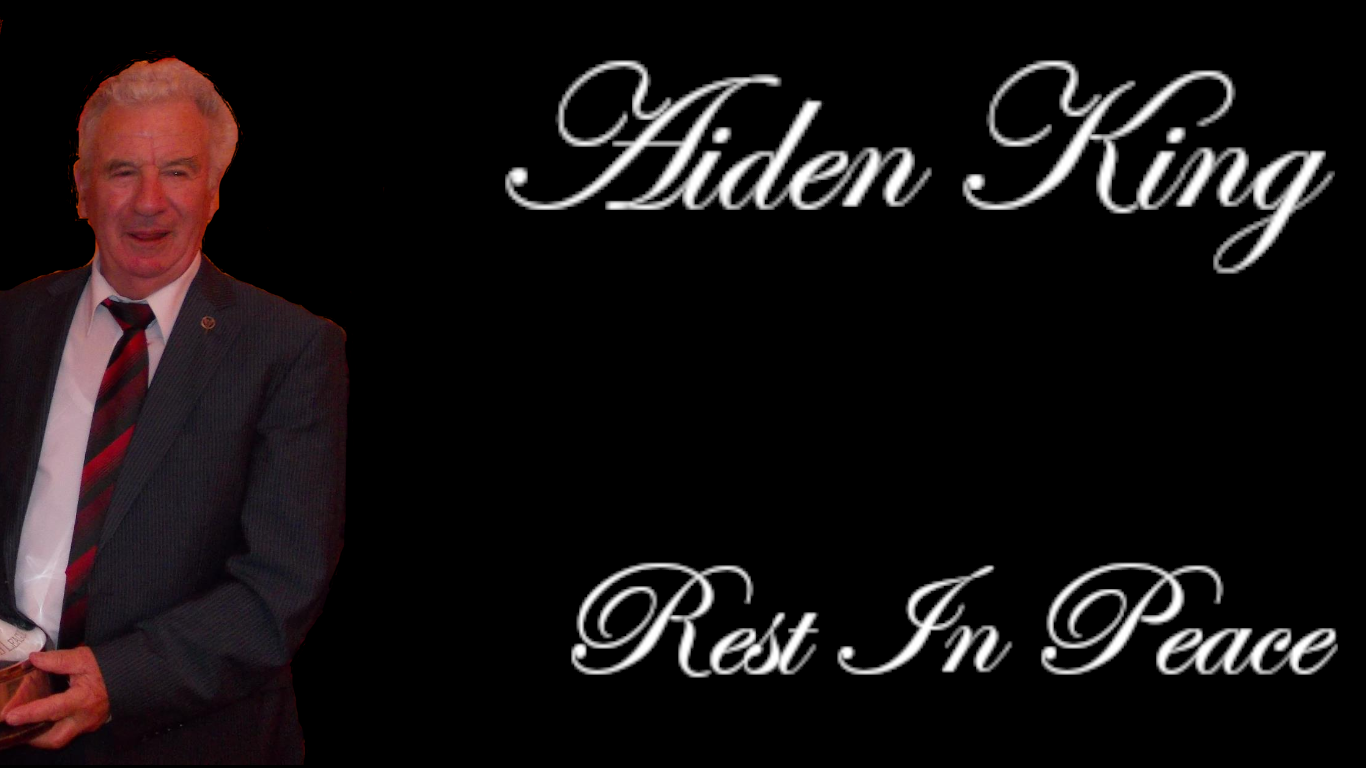 “I’m sure that lots of people would like to propose and tout as to whom they would like to recognise as one of the greatest individuals ever involved with Westport United, and I would nominate Aiden King as one of the most inspiring people that was ever involved with Westport United for all the behind-the-scenes work that gets so little recognition”. This was written about Aiden King on the Westport United Centenary book back in 2011 by fellow club colleague, Kenneth Gannon.

It is with deep regret and profound sadness that we learn of the passing of our Vice President, Aiden King, who passed away yesterday (Friday) following an illness that was bravely fought with great courage.

Aiden King was a true Westport United club man who was involved as a player, committee member, volunteer, coach, supporter, President and Vice President over many decades in the club, a club that he got involved with as a young boy on Castlebar Street, where he was born and reared back in 1938. He had family connections to the club which helped him develop and nurture his unconditional love and affection for the Red and Black and that deep and unyielding bond carried through right through the end.

Aiden was a player that represented the club in the late 1950s to early 1960s and was keen to showcase his talents in a very good Westport United team and a very difficult Westport United side to make the starting eleven, given the level of competition for places. Aiden also played for Fr Angelus Park in the local town leagues, and it was in these leagues that his talents were noticed and recognised. While Aiden was successful at Mayo level, he was unfortunate never to have won a Connaught Cup medal and there’s no doubt that he would have been proud to have the provincial medal on his mantlepiece.

As a coach, Aiden was manager with Noel Duffy of the Junior team back in the early 1980’s, winning Mayo Leagues and reaching the last 16 of the FAI Junior Cup back in 1984. However, Aiden’s contributions are more remembered when, alongside Ger Kennedy, managed the club’s U.12 side in the early 1990’s and many of the players that came through Aiden’s nurturing care went onto win the FAI Junior Cup in 2005. Also back in 1992, Aiden, with Ger Kennedy helped the Westport Community Games U.12 Boys team to an All-Ireland bronze medal in Mosney. Aiden did remain with helping teams for some years after.

As a committee member, Aiden was a loyal and dedicated member who would never miss a meeting and if there was a point to be made, Aiden would speak his mind for the betterment of the club. As for volunteering on club duties, Aiden was always first and foremost between preparing pitches for match days, cleaning out the dressing rooms after games, running the lotto on Sunday nights and never looked for recognition for the work he did; always remaining humble about his contributions towards the club. However back on 2011, the Club Centenary Year, the Mayo Association Football League did recognise Aiden King and inducted him into the Hall of Fame and he deservedly got his recognition for his services to football to the club. The club also gave Aiden deserved recognition by electing him as President and he served his term with honour. When Aiden’s term as President expired, Aiden then proposed Willie Kelly to succeed him, and Aiden then served as Vice President. As Vice President, Aiden was delighted to see Westport United attain the FAI Club Mark Award and was present at United Park for the presentation of the award by the FAI last August.

As a supporter, Aiden was unique. Aiden would support every team in the club in every age group; juniors, boys, and girls and whether it was the Sports Park or United Park, Aiden was always there in rain, hail, or shine and all the children loved to see him at the games. He was that father figure that radiated his presence at games and made the players and fellow spectators feel at home. Aiden wanted to see every footballer do well and he always wanted the Red and Black to win and, most importantly, he always stuck up for the players if they were ever in trouble on the pitch. If Aiden was travelling to away matches, he would never be shy in offering a lift to a fellow supporter and never looked for anything in return. When Westport United travel around the country for big games, Aiden would always be on the front seat of the bus and always looked so dapper in representing the club. Aiden would always enjoy the trips around the country but always got great satisfaction when his beloved Westport United would win on the road. In recent times, Aiden would still go to some games but would watch the live streams to keep up his support of the teams playing. The last game Aiden was at was the Calor Gas Premier Cup Final between Westport United B and C teams and the Chairman of the Mayo League, Gerry Sweeney acknowledged his presence at the game in a fitting tribute. Right up to the end, Aiden enquired about his beloved club, asking about new signings and he even asked about the forthcoming FAI Junior Cup game against Peake Villa.

Club Chairman, Mr Stephen Duffy paid tribute and said “It is with great sadness that we learned of the passing of our great friend and colleague, Aiden King yesterday evening. Aiden, as you all know was the Vice President of Westport United, a former President of the Club, committee member for the last 40-50 years. Aiden, you’d see him down here at every single game, whether it was boys, girls, academy, men, and women, he supported every team in the club and he would be greatly missed. The word legend is often easily thrown out about people but Aiden King will definitely go down as a true Westport United legend. He will be greatly missed and it’s hard to believe that we will never see Aiden down here again. My deepest condolences to his wife Mary, his daughters Marie and Aithne and sons Aiden and Geoffrey. We are deeply, deeply sorry to hear about Aiden’s passing but we’ll know that he’ll be up there, he’ll be looking down on us all and he’ll be supporting us through thick and thin. God bless Aiden and sleep well”.

Club President, Mr Willie Kelly in his own tribute said” I would like to thank Aiden for proposing me as President of Westport United and for the lovely way he helped me to carry out the task as President of the Club. Aiden gave me a lot of help as President and I extend my sincere sympathy to Mary and Family”.

Aiden will be reposing at his residence on Sunday (Feb 13th) from 5pm until 7pm for family and friends. Requiem Mass on Monday morning at 11am in St. Mary's Church, Westport, with the funeral proceeding to Aughavale Cemetery. Mass will be live streamed on www.churchtv.ie/westport and broadcasted live on Westport Parish radio at 104.8FM. Family flowers only, please. Donations, if desired, to The Mayo Hospice c/o McGing Funeral Directors, Westport.

Please adhere to the current Covid-19 guidelines including wearing of face masks, no hand shaking and walk through only.