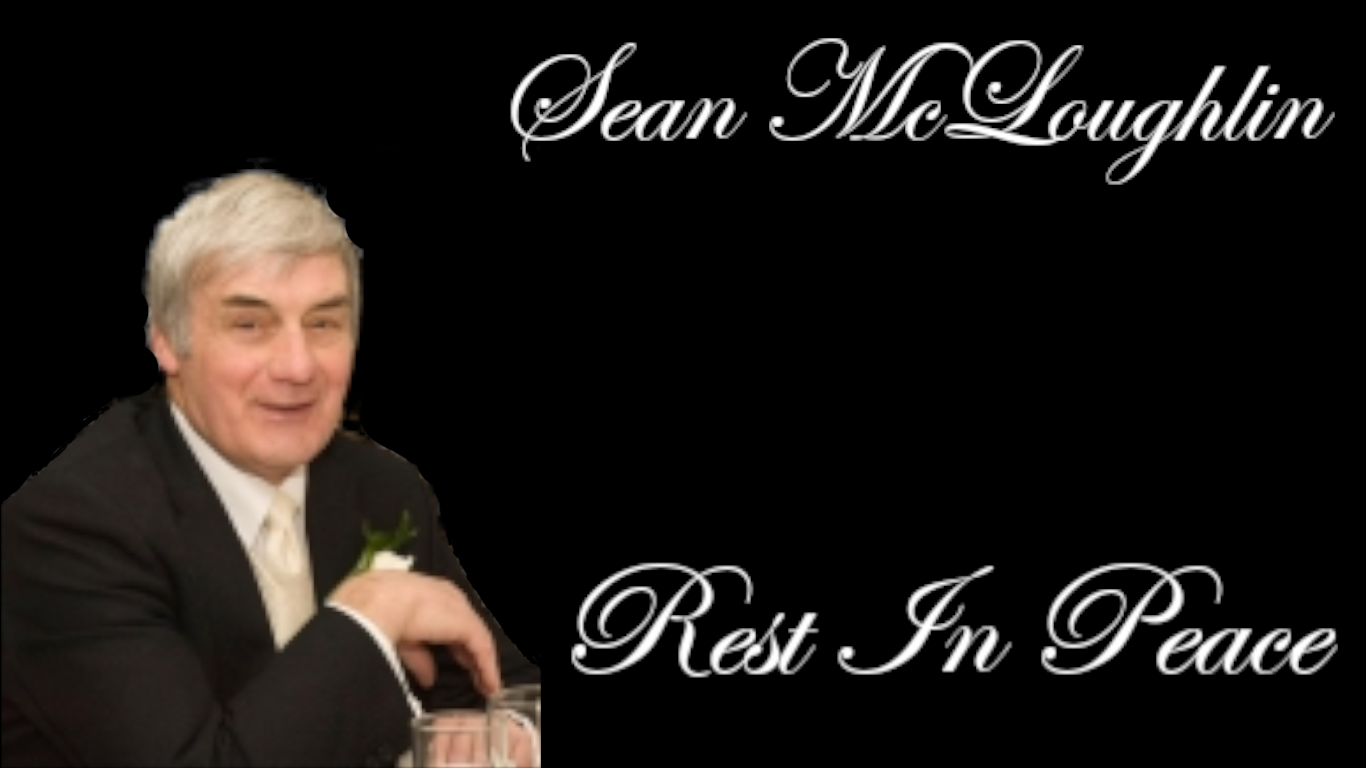 "In all the conversations and interviews that have taken place during the process of putting this book together, there is one name that keeps cropping up. Sean McLoughlin". This was written by Padraig Burns back in 2011 for the Westport United Centenary Book when he penned a chapter under the heading "A Class Apart".

It is with deep regret that Westport United learned of the passing of a footballing legend that was Sean McLoughlin, the greatest footballer to don the famous Red and Black of his generation and one of the best Westport United footballers in history.

Sean McLoughlin was born on August 25th 1940 to Hugh and Tina McLoughlin and grew up at McNeela Terrace at The Quay, the spiritual home of football in Westport, where sailors brought the game to the town some 50 years earlier. It was out The Quay where Sean, like all his contemporaries, honed their footballing skills. Everyone played football out there from morning until night. Everyone that played had a talent but the talent of Sean was a different class. He was so good on the streets of McNeela Terrace and the nearby fields alongside with representing Quay Hearts in the local leagues that he bamboozled everyone and it was only a matter of time that his amazing talent would be recognised.

1956 was to be the year that the twinkle toed star would be elevated from playing street football to donning the Red and Black. In January of that year, Sean made his debut for Westport United in the FAI Junior Cup replay away to Athlone Town and the midlanders might have won the game but Sean immediately won the hearts of the supporters. Later that year, Sean became the first Westport United footballer to win a Republic of Ireland Youth International Cap against England, one of his team mates that day was Johnny Giles. Sean was so talented that he had trials with Manchester United for two weeks that year under the watchful eye of Sir Matt Busby and also had trials with Everton in 1959. Jackie Carey, then manager of Blackburn Rovers also had a keen interest in the young Westport man.

Sean did settle in England, playing for Croydon Amateurs and enjoyed his playing days there, even captaining the club team. On returning to Ireland, Sean had a short spell with Bohemians in Dublin in 1967. When Sean did tog out for the Red and Black during the 1960's he was a different class from his team mates, a real aura about him on the pitch when he gracefully mastered the ball and the supporters at that time often likened him to George Best. Sean enthralled the supporters so much that the ladies were swooned by his looks as much as his talents and the kids wanted to emulate their local hero. Sean won almost everything that could be won in junior football. He won a Connaught Cup medal in 1961 and again in 1974, when he captained Westport United to glory. When Westport United reached the semi final of the FAI Junior Cup in 1969, Sean McLoughlin had the misfortune of missing the game through injury and United lost 2-0. Had McLoughlin played and United won, he would have been back in Dalymount Park for the final, having played there two years previous for Bohs.

Sean retired back in 1976 from playing and he started to give back to the club what he earned in the previous 20 years. Sean was instrumental in the formation of Westport United Youths and was a very progressive and forward thinking manager and he also served as Chairman of Westport United Youths. Sean got plenty of respect from the children and they all enjoyed their football under his charge. Sean did get involved in junior management during the 1980's and was assistant manager to John Herrick when Westport United won the Connaught Cup in 1987. Sean also managed Westport United U.18 teams that got to back-to-back FAI Youth Cup Quarter Finals in 1990 and 1991. In 2000, Sean was manager of the Westport United U.18 team that won the Quigley Cup, most of whom went in to win the FAI Junior Cup five years later.

Sean's involvement wasn't centered on Westport United, Sean was also chairman of the Mayo Schoolboys/Girls and Youths AFL and managed county teams also to great success. At that capacity, Sean was a tireless worker for the betterment of schoolboys football in Mayo.

When Sean took a step back from the coalface of being involved in coaching and admin, Sean would go to every match of every age group until he took ill some years ago. Sean took a great interest in every team and all players and at half time, Sean would often come around to the Westport United dugout and offer gentle words of encouragement to the players and useful tactical advice to the managers. Sean knew the game and understood the ways that it was played and his advice to managers was an education to all mentors; not only he was a great spectator but a valued teacher on the sidelines. Sean was also Club Vice President and Club President in recognition of his valued contribution to the club.

Like many of us, Sean's proudest day was when Westport United won the FAI Junior Cup in 2005 and his youngest son, Alan was part of that squad while Iain retired from first team football only months before that success. Sean was also proud to see his son Ray playing League of Ireland football and also representing the Irish Universities football team. Sean was always proud of his family's achievements not only on the football pitch but in all sporting disciplines.

Unfortunately, Sean was diagnosed with illness and during his time, he was in company with the late, great Tony Browne and both of them enjoyed each other's presence. Two years ago, Tony passed away, a loss of a great friend in Pilgrim's Rest Nursing Home and later that year, Sean lost the love of his life, Gerri.

Sean was a gentleman on and off the pitch and was respected by all. Many visitors to Westport that were involved in football would regularly enquire about Sean, including former Republic of Ireland international footballer and manager, Johnny Giles, a team mate of Sean for the Republic of Ireland schoolboys team in 1956 and they both went to the same trials at Manchester United that year. Both Sean and Johnny did meet up at The Sports Park a number of years back. Along with being a forward and progressive thinker in coaching and development of underage football, a great clubman that had the best interests at heart. As a player, he represented what was a Golden Generation of players and Sean was the cream of that generation. A man that was idolised on the Sports Park terraces by so many supporters, whose skills lit up every football pitch he ever graced, a man that was humble and modest about his abilities and achievements and used these values to be a brilliant mentor to young children and fellow club coaches alike. In an era graced by Pele, Eusebio, Charlton, Beckenbauer, Cruyff, Fachetti and George Best, Westport United had its George Best and Sean McLoughlin was the very Best and the twinkle stars that dazzled from the boot, now dazzles in the Heavenly skies above us.

May his gentle soul rest in peace

Sean will be reposing at his residence on Wednesday, June 29th, from 4pm to 7pm. Removal from his residence to St. Mary's Church, Westport, on Thursday, June 30th, at 1pm for Funeral Mass at 2pm. Burial afterwards in Aughaval Cemetery. Mass will be live streamed on www.churchtv.ie/westport. Wearing of face masks and hand shaking optional. The family would like to thank you for your co-operation and consideration at this time. Anyone wishing to leave a message of sympathy for the family can do so on our social media platforms.

House private please at all other times

*As a mark of respect to the late Sean McLoughlin, the Elvery Sports Super League match between Westport United and Castlebar Celtic has been postponed.